1. You recently published a video on social media begging the Biden administration to help Afghan girls who are now being targeted by the Taliban can you elaborate on that?

Twenty-one successful female athlete champions and their nuclear families who are Afghan refugees were forced to flee Afghanistan in February 2022, in fear of their lives from the Taliban, after being threatened with torture and imprisonment due to their love of sport for which in extreme cases girls are being killed. The sports girls are currently in Pakistan on temporary visas, while waiting for the Charity Foundation Help Children Now to secure asylum on their behalf. Their visas expire on August 17, 2022, at which point the girls will face repatriation to Afghanistan and consequently may face imprisonment, torture, and possible execution by the Taliban. We are therefore requesting for the United Nations, and any, and all state departments to assist with an urgent intervention to secure asylum in the United States or another country of stability that embraces women in sport.

Sharia Law is a body of religious law that forms part of the Islamic tradition. It is derived from the religious precepts of Islam and is based on the sacred scriptures particularly the Quran. Five major goals

But the Taliban's distortion and radical interpretation of Sharia Law is insane, no different than ISIS and Boko Haram etc.

3. How else has America's withdrawal negatively affected the Afghanistan people?

We have to ask our governments hard questions if the western governments are pledging refugee asylum quotas. When are they going to be held accountable to meet the quota pledged? When will we see serious action and Afghan targets be fulfilled? We all recall the terrible scenes during the Afghanistan evacuation crisis played out across our global news channels, months prior to the War in Ukraine. Yet again Afghan citizens like these young girls have been abandoned and failed, appallingly by our governments. The everyday lives of the Afghani people, especially the females have been turned upside down. They are ostracized, treated as second class citizens, scrutinized, beaten, arrested, told what to wear, the list is endless. 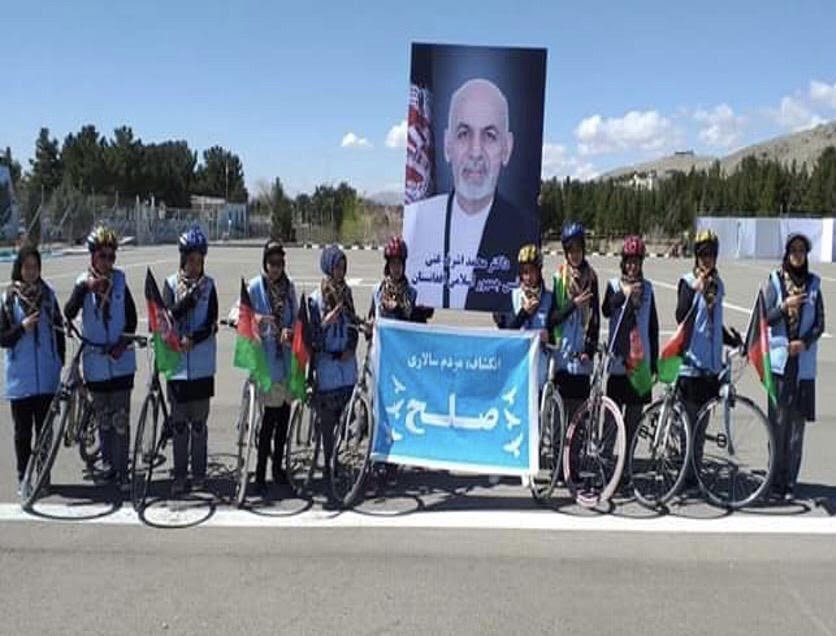 Afghan Female Cycling Team with a photo of the Former President of Afghanistan Ashraf Ghani — September 2014 until August 2021, when his government was overthrown by the Taliban.

4. What will happen if no one intervenes?

If no country intervenes then we can only hope and pray that the Pakistan Government extends their visas otherwise they will be repatriated back to Afghanistan.

5. Why hasn't the quota for refugees been met?

It goes without saying actions speak louder than words. Biden made promises he could not keep. He lied to the International community, he lied to the American public and he lied to the Afghans and they are paying the ultimate sacrifice. I always tell people not to listen to someone's words but only by their actions. And when it comes to Biden who preached a whole lot but his follow through has been absolutely pathetic.

6. Did you watch the news report as the last American planes were leaving and people were trying to hold onto the planes and falling off trying to escape?

The entire world watched it play out in real time. How awful, what an embarrassment so much for President Biden and all the broken promises to the Afghan people.